Bishop Kevin J. Aje was born on 25th April 1934 in Amper District in Pankshin Division (present day Kanke Local Government Area of Plateau state). He was the only male in the family of four children. At the time of his birth, his parents were Traditionalist. However, his mother and sisters were later converted to Christianity. His mother, Laraba, was christened Angelina and became a communicant. Other members of the family followed suit.

He had his elementary education in Amper, Pankshin, Kwa and Shendam respectively under the watchful care of the Irish missionaries. For a period of two years, he was trained as a local teacher, and taught for a year before deciding to join the Catholic Priesthood. His choice was propelled by the generosity and love expressed by the foreign Irish missionaries to the people of his local community, coupled with their commitment and dedication to their pastoral work.

Moved by the vigorous evangelical works of the missionaries, young Kevin was enrolled in St. Theresa’s Minor Seminary, Oke-Are, Ibadan, in 1953, where he obtained his Secondary School Certificate. He further proceeded to the prestigious Saints Peter and Paul Major Seminary, Bodija, Ibadan. Having duly completed his basic formation, Rev. Kevin Aje was ordained a Catholic Priest on June 12 1966 in Jos, for the then Diocese of Jos by Bishop Reddington, SMA.

Fr. Kelvin J. Aje was assigned for further studies to St. Francis Xavier University, Canada in 1975. On his return from studies in 1977 he was appointed as the Cathedral Administrator of Our Lady of Fatima Catholic Cathedral, Jos. In 1982 he was elected as the Coadjutor Bishop of the Diocese of Sokoto. To succeed Bishop Michael James Dempsey, Rev. Fr. Kelvin J. Aje was ordained to the episcopate by His Holiness Pope John Paul II (Saint John Paul II) on January 6, 1983 in Rome. He was officially installed the Bishop of the Diocese of Sokoto on April 28, 1985; thus becoming the third Bishop and first indigenous African Bishop of Sokoto Diocese. 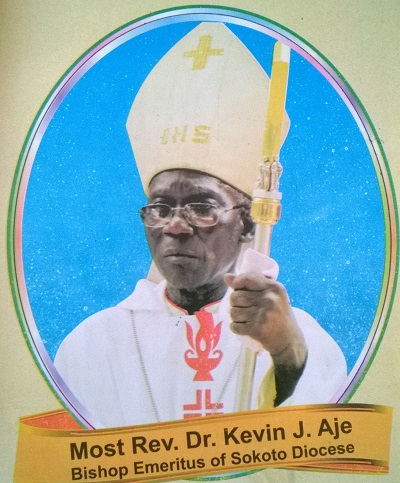 Bishop Kelvin J. Aje served as the Bishop of Catholic Diocese of Sokoto from April 28, 1985 to September 8, 2011, a period of twenty Six (26) years. In his year of active service, he was a strong advocate of peaceful co-existence among the Catholics and other Christians, as well as among Christians and Muslims. During his years as the Bishop, Most Rev. Dr. Kelvin Aje has served as the Chairman Christian Association of Nigeria (CAN) Sokoto State Chapter for 10 years. On September 8, 2011, Most Rev. Dr. Kelvin J. Aje embraced the title of “Emeritus” as the Bishop of the Diocese of Sokoto by happily handing over the mantle of leadership to his successor; Most Rev. Dr. Matthew Hassan Kukah (then Msgr. M. H. Kukah). 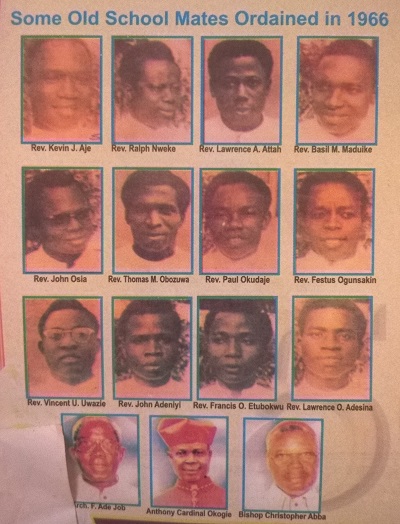 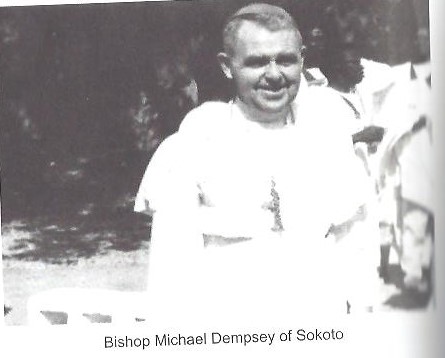 James Edward Dempsey was born in Providence, Rhode Island to Joseph M. Demspey and Julia Mary McSherry. He was educated at St. Mary's Grade School, LaSalle Academy and Providence College all in Providence. Dempsey entered the Dominican novitiate at St. Rose Priory in Springfield, Kentucky and took the religious name Michael. He made his first profession of vows on August 16, 1936. Philosophical studies were taken at the Dominican House of Studies in River Forest, Illinois and Dempsey made his solemn profession on August 16, 1939. He decided to join the newly established Province of St. Albert the Great and continued his theological studies at River Forest. Dempsey was ordained a priest by Bishop Bernard J. Sheil on June 11, 1942.

Michael Dempsey taught English and religion at Fenwick High School in Oak Park, Illinois from 1943 to 1950. At the same time he obtained a master's degree in English literature at DePaul University in Chicago. In 1951 he entered the missionary field in Nigeria. He served five terms as pastor and local superior at St. Dominic's Parish in Yaba, Lagos. He was on leave from January 24, 1955 to February 2, 1956. When he returned he was made the Vicar Provincial for the Dominicans of Nigeria. His responsibilities were reduced to Yaba from 1959 to 1962. On August 27, 1965 Dempsey was appointed the vicar of the Nigerian Vicarate.

On July 13, 1967 Pope Paul VI appointed him as the Bishop of Sokoto. He was consecrated a bishop by Cardinal John Cody of Chicago on August 15, 1967 at St. Pius V Church in Chicago. The principal co-consecrators were Archbishop John Kwao Amuzu Aggey of Lagos and Chicago auxiliary bishop Aloysius John Wycislo. He was installed as the diocesan bishop in Sokoto on October 1, 1967 and continued to serve there until his resignation was accepted by Pope John Paul II on December 3, 1984.

Prior to his appointment as bishop there were anti-Igbo and anti-Christian riots in 1966 that left the diocese of Sokoto without most of its people, its only indigenous priest fled, and many of its church buildings destroyed. He focused on the northern part of his diocese where the people remained and opened the first secondary school in Gusau in 1968. The civil war ended in 1970 and the Catholic people began to return to the Sokoto diocese. The oil industry expanded in the 1970s and that helped to increase the size of the diocese. The Dominican sisters began a congregation in Gusau. The catechetical school at Malumfashi trained catechists for northern Nigeria. Successful evangelization efforts were made among the Hausa people. Good relations were maintained with Muslims and other Christian churches. Dempsey suffered several minor strokes toward the end of his time as bishop. He was also the only non-Nigerian bishop in the country. He had to check in and out with the police when he left Sokoto State to enter Katsina State, which was also a part the diocese.

In the autumn of 1985 Dempsey returned to the United States.He took up residence at St. Dominic Priory in Denver, Colorado and helped out at St. Dominic parish where he ministered to the sick and aged. His health declined and he moved into the Mullen Home, which was operated by the Little Sisters of the Poor in Denver. He died there at the age of 84 on March 19, 1996. Archbishop J. Francis Stafford of Denver celebrated the funeral on March 25, 1996 at St. Dominic's Church. Bishop Dempsey was buried in the Dominican plot at Mount Olivet Cemetery. 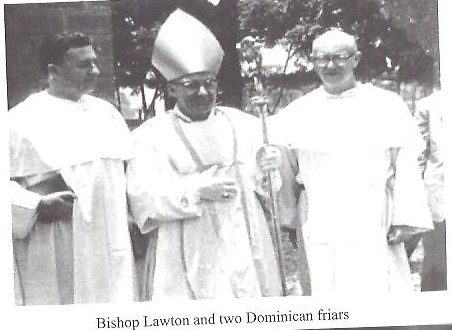 Born in South Boston in Massachusetts, Lawton was educated at St. Francis de Sales School, Boston College High School, and Boston College. He entered the Dominican novitiate at St. Rose Priory in Springfield, Kentucky and he made his first profession of vows on August 16, 1937. His philosophical and theological studies were taken at the Dominican House of Studies in River Forest, Illinois and he was ordained a priest there on June 6, 1943.

Lawton's first assignment as a priest was teaching at Fenwick High School in Oak Park, Illinois where he remained until 1951. That year he entered the missionary field in Nigeria. He became the director of the Thomistic Institute where he lectured at both Yaba and Lagos. Lawton gave retreats to priests and religious during breaks in the academic year. He also served as the archdiocesan director for Catholic radio programs. The Prefecture of Sokoto was established on January 15, 1954 and he was appointed its first Prefect Apostolic. He was invested on November 13, 1954 at St. Pius V Church in Chicago. He initially established himself at Gusau. The prefecture had 1,200 Catholics among five million people, most of whom were Muslim. He served there with one other priest until 1956 when fellow Dominicans from the St. Albert the Great Province in the United States arrived as well as Dominican Sisters from Great Bend, Kansas. He moved from Gusau to Sokoto in 1961. He suffered several health problems, including a heart attack. The prefecture grew to more than 10,000 people and it was elevated to a diocese on June 16, 1964.

On June 16, 1964 Pope Paul VI appointed Lawton as the first Bishop of Sokoto. He was consecrated a bishop by Archbishop John McCarthy, S.M.A. of Kaduna on August 15, 1964. The principal co-consecrators were Bishop John J. Reddington, S.M.A. of Jos and Auxiliary Bishop John Kwao Amuzu Aggey of Lagos. He attended the last two sessions of the Second Vatican Council in 1964 and 1965. While traveling in an automobile he suffered a coronary thrombosis and died on December 19, 1966. His funeral was held the following day at Our Lady of Fatima Church in Gusau and his body was laid to rest in the cemetery adjacent to the church.