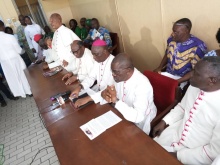 The Catholic Archbishop of Lagos Archdiocese, Most Rev Dr. Alfred Adewale Martins has marked the 6th anniversary of his installation with media briefing on Saturday 4th August, 2018.

Distinguished gentlemen of the Press, I begin by thanking you all for honouring our invitation to this Press briefing marking the 6th anniversary of my installation as the Catholic Archbishop of Lagos. In a special way, I welcome the representatives of members of the Catholic Media Practitioners Association of Nigeria (CAMPAN) who have come from the various Dioceses of our country for their Conference, deliberating on a theme that should serve the collective well-being of our people. I am glad that you could come to be part of the celebration of my anniversary by participating at the Mass and being present to take part in this Media Briefing.I hope you will leave with pleasant memories of a time well spent with us here in Lagos as you return to your various destinations tomorrow.

I also thank the representatives of the various media organizations who, as usual, have hearkened to our request to be part of this media briefing to mark the6thanniversaryof my installation. Our collaborative efforts over the years designed to help promote the cause of good governance through instructive, objective, unbiased evaluation of events in our dear country is one that I believe should continually be strengthened and encouraged if we must help build the Nigeria of our dream. Your responsibilities as members of the fourth estate of the realm and the conscience of the nation in a fledgling democracy such as ours are clearly spelt out in our constitution. I urge you therefore to remain resolute on the path of truth, unbiased and objective reportage of news and events. You must not be cowed or intimidated from doing that which is right and needful at all times, irrespective of the situation and people involved.

Distinguished Ladies and Gentlemen, there is no doubt that our country Nigeria is passing through very ominous and disturbing times.  The polity is continually being heated up by the political elites, they have turned the nation to their play fields and fiefdoms that should be exploited, balkanized and conquered for their selfish ends. We have been crying out against these injustices over the past years and we shall continue to say it loud and clear, that this nation belongs to all Nigerians. As such, it is wrong for any group of individuals, under any guise to arrogate to themselves the unwarranted role of deciding who gets and does not get what in a country that belongs to all. Unfortunately, we see this playing out every day in the name of party politics whereby a group of individuals ‘scramble’ for, and selfishly allot to themselves and their cronies the wealth and resources of this great country while leaving little or nothing for the masses of the people of Nigeria. That is why majority of our people remain impoverished, disempowered and just floating about without dignified living conditions in a country that is so blessed as ours. For long, we have been living witnesses to the various dramas being played out in the political arena across the length and breadth of this country. We have continued to watch with disbelief as the same old groups of individuals keep on recycling themselves even when the Not-too-young-to-run bill has been passed and signed to law by the President. The same old groups and their families keep on shifting the goal post while they leave the young, enterprising people with fresh ideas unable to get opportunities to use their new experiences to impact on the nation and its people. The money politics that still rule our nation makes new people who not aligned to the old order not to find a foothold in our political landscape. For how long shall this continue to happen?

Distinguished Ladies and Gentlemen, on a day like this, my message to the good people of Nigeria and to our leaders is very clear. The entity we call Nigeria needs urgent reconfiguration. Enough of living in self-induced deceit! I have said many times in the past, the present structure of our country is incapable of giving Nigeria the best shot at meaningful growth and welfare of the masses of the nation. It is an ill wind that blows no one any good. There are many pointers to this fact. We have been operating the present system of government that is built upon the military command structure for so many years, yet our country is rated as having the greatest number of impoverished citizens in the world. How does one describe the fact that human lives in this part of the world have become so cheap that people are killed like chickens on daily basis all over the nation; all because our security system is incapable of taking care of the people in the face of the challenges of terrorists who masquerade as herdsmen? It is no wonder that no one is being held accountable except when it comes to situations such as that of the five Christian boys who were condemned to death in controversial circumstances recently? Is it not the case that millions of our university graduates are wasting away doing odd jobs; driving taxis, selling recharge cards and manning betting joints (Baba Ijebu) etc; just to eke a living?Corruption still thrives, religious intolerance, injustice, nepotism, kidnapping, armed robbery and all forms of social ills still continue to dog the heels of Nigeria and slow down its development.

The root cause of our myriads of problems has long been identified as the problem of leadership. We need a leadership that is courageous enough to recognize the need for a radical reorganization of the way Nigeria is governed and is able to summon the will to make the required change. It is not just about recognizing the need for restructuring but also about dealing with the over-bloated budgets that we find in operation especially at the Executive and Legislative arms of government at the different tiers of government:Federal, State and Local Government.

The 2019 elections are around the corner and we call on INEC and all other Agencies concerned to work towards giving the nation an election that is credible and transparent in its operation. In the recent governorship elections in Ekiti State we were regaled with stories of how votes were openly traded like a commodity put up for sale between voters and the major political parties. What a tragedy that such a scenario was allowed to play out unchecked at a time when ‘change’ in all its ramification is the expectation of all and sundry.

In the next two months or so, Nigeria will be clocking 58years as an independent nation. But how truly independent are we? Fifty-eight years after independence we are still plagued by ethnic agitations, cries of marginalization by different sections of the nation and the rise of militia groups arising from perceived nepotism and all kinds of injustices. And so, I ask: which nation under the sun can grow and ensure the welfare of all her citizens in such an atmosphere? Our independence anniversary calls us again to examine whether we are a truly Federal Republic or not.Who is afraid of restructuring?I want to say with all sense of responsibility therefore, that except this entity, called Nigeria is restructured and done quickly, things may go even more awry. The hand writing is very clear on the wall. It is only those who wish this country otherwise that would continue to justify the unjustifiable.

In conclusion, I ask that we continue to keep our nation in prayers as we know that God can do much more than we can ever dare to ask in order to turn things around for the good of our people. Religious leaders need to lead with righteousness and integrity never taking advantage of the credulity of our people and their natural disposition to faith and the practice of religion. I want to also call on Nigerians not to be carried away by the political intrigues that are playing out on daily basis; new political alliances and cross-carpeting etc. Such are capable of distracting people from seeing the bigger picture. Instead, Nigerians must demand for their God-giving right of getting the best of the endowments of their nation which can come only from good leadership managing a country that is structured for the welfare of the people. This is the nation we all desire as citizens of Nigeria. Into God’s able hands we commit our nation, Nigeria. Thanks for listening. 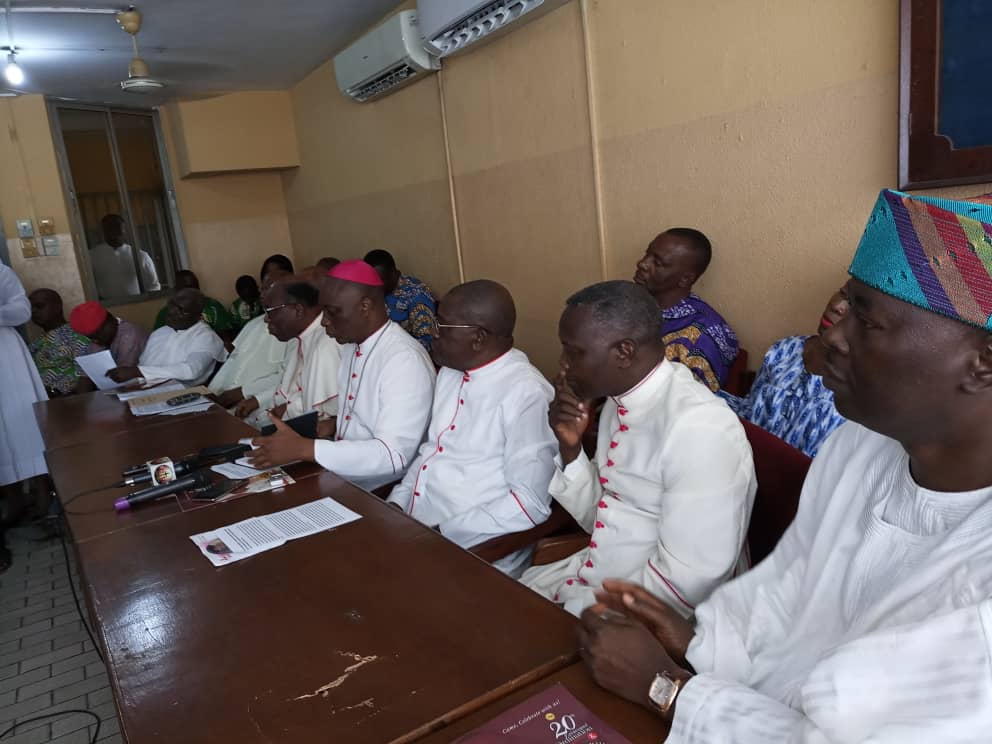 THREATS TO THE CHRISTIAN FAITH IN CONTEMPORARY NIGERIA
ArchBishop Adewale Marks 6th Anniversary of his Installation, holds Press Briefing.
Religion, Violence and Peace-building: Challenges for Integration and Development
DEMOCRACY, POLITICAL PARTIES, ELECTORAL INTEGRITY AND GOOD GOVERNANCE
COMMUNIQUÉ ISSUED BY SIGNIS-AFRICA MEMBERS AT THE END OF THEIR CONGRESS IN ADDIS ABABA, ETHIOPIA, FROM 3RD TO 7TH SEPTEMBER 2019