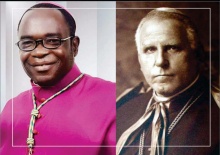 The year was 1946. 16th March precisely. A cold late-winter day in Münster, Germany. Bishop Clemens August Count von Galen had returned, not from exile but  from Rome and was progressing through the old inner city. He was wearing the red hat and robes of a cardinal of the Holy Roman Catholic Church. It was less than a year since Germany's defeat in the Second World War, and now Münster's own beloved bishop has been named by Pope Pius XII to the College of Cardinals. Some fifty thousand people had crowded the city to rejoice. Adolf Hitler's "Thousand-Year Reich" had done untold damages during its twelve years of power. The horrors of the concentration camps and death camps had been discovered after the war, and they were infinitely worse than anyone could have imagined. The people were poor. Many still did not know whether their husbands, sons and fathers were alive or dead. Hundreds of thousands of Germans still languished in prisoner-of-war camps, unable to contact their family.

Standing on the ruins of the City of Münster  where nearly 90 percent of the buildings were damaged by multiple allied bombing raids, the newly created Cardinal Clemens August von Galen addressed the joyous crowd in the following words:
*"The dear God placed me in a position in which I had a duty to call black "black" and white "white"...I knew that many suffered more... much more than I personally had to suffer...from the attacks on truth and justice that we experienced. They could not speak... They could only suffer...but it was my right and my duty to speak, and I spoke... and God gave it his blessings"*

These were no empty words spoken by the man who had been described as the Lion who roared against the Nazis. In so doing, he risked death at the hands of the Nazis. One Gestapo even called for his public hanging. Joseph Goebbels and others in the Nazi Leadership, knowing the bishop's popularity, advised waiting, subscribing to the adage that "revenge is a dish best served cold" and therefore, in his thought, it was better to deal with the Bishop of Münster after the war had been won. Unfortunately, they never saw the end of the war.

Bishop Matthew Kukah have always projected the spirit of Bishop Clemens August von Galen in the political and religious atmosphere of Nigeria. Time and again, he had served the Federal Government with dishes graced with spices that refreshes the open wounds of petty paranoia and sheer irresponsibility of the Presidency in the face of serious issues. Like Clemens von Galen, he had never minced words in calling black "black" and white "white" because he knew that many vulnerable Nigerians suffer much more than he had personally suffered from the attacks on truth and justice. These Nigerians could not speak. They could only suffer.

Bishop Kukah had accused the Federal Government of nepotism and failure to tackle insecurity head-on during his virtual presentation to the Tom Lantos Human Rights Commission in Washington, DC on Wednesday, July 14. He said the Federal Government has failed to handle the issue of security which it promised to do before taking over power. Bishop Kukah said the people are yet to see any tangible move towards tackling Nigeria’s insecurity which, according to him, has a religious undertone.  He made the point that we have a democracy with weak structures, and institutions.

I am yet to fathom what was false in the above Bishop Kukah's message that required such a fierce rebuttal from *Garba Shehu's "Presidency".* The fact that Nigeria is becoming a failed state is in the public domain. The facts speak for themselves. Black is black and white is white. It doesn't even need a spokesman like Bishop Kukah. But then, the fact that the presidency is always quick to respond negatively whenever the very state of affairs of Nigeria is revealed by voices of truth and reason is something of grave concern. That has been the mode of operation of the present administration over voices of reason that contend with it over the years. It is not a new normal but a shameful administrative tradition. Bishop Kukah has been accused by the Presidency of spreading falsehood with the intent to discredit the administration. This is not the first time he has been accused of such. Who knows the next allegation: treasonable felony perhaps. Such mode of operation can only reveal the shameless autocratic pettiness and paranoid irresponsibility of those who run the affairs of this country. It seems that the Presidency is only interested in the useless external integrity and sovereignty of a nation rather than the speedy transformation of a country and the mass of its people from a state of poverty to a more dynamic state of economic growth which makes possible greater social equality and large fulfillment of human potentials, in the words of Quibbler. Shame indeed is the word.

The constitution of the Federal Republic of Nigeria expressed the concept of power of governance as a sacred duty to the whole people and not as a power that one could exercise on behalf of one's private interests or of the private interests of one's social group. Therefore, wherever power lies, those who exercise that power must see it as a sacred responsibility, a public duty for which they are answerable to God, to man and their conscience. All the calls for agitation, self determination and secession in Nigeria only exist because the above claim in the Nigeria constitution is a big bold illusion.

Bishop Clemens von Galen once wrote: "woe then to our poor German people. Disorder and revolutionary convulsions will not come to an end until the battle of everyone against everyone has spent all its power." He ended with an appeal to Catholic representatives at the national assembly to make clear our self-evident conception and to work for the truth about the origin and the authority of the state, for freedom against human arbitrariness, for the rights of God, the King of Kings and Lord of Lords.

Come to think of it. What if there were many Kukahs in Nigeria? Imagine a Nigeria with many Kukahs like around 30 or 40 questioning the authority and legitimacy of the powers that be. Could you imagine how crazy the Presidency would be if it has to respond to many spiced dishes cooked by different Kukahs from different backgrounds across the nation. It will certainly reveal the madness that lies within which will certainly leave us to wonder why we as Nigerians have such a tenacity to mediocrity. Yes, we will discover the trash we have become ourselves to have chased shadows and sold our consciences during elections. To be sure, it will make us discover how naive, insensitive and laisser-faire we have been in matters that concerns our national polity. Certainly, we shall understand that as Nigerians, we are the very architects and master minders of our own problems.

But the real question is: *why aren't many Kukahs cooking?*

Finally, Von Galen once asked where the blame of Germany's military and political collapse in 1918, was to be found. Of course, he agreed with many that the German army was betrayed by leftist revolutionaries but argued that the real fault lay deeper:
" How did it happen that the revolution succeeded, that many, maybe even the majority of the people, did not merely accept the revolution quietly, but saw it as something of good fortune, as a salvation. This could not have happened unless Germany was already sick from within, The sickness was the sickness of an ideology: the idea of the state as God, the idea of all-powerful, boundlessly mighty state owing no duties to anyone".

The all powerful state, what von Galen called *State absolutionism* was in his mind the enemy of true freedom."

Truth be told. Nigeria is collapsing because *"some animals are more equal than others",* to use the very words of George Orwell. This absolutionism of a kind is the enemy of true freedom in Nigeria which is consuming her from within. This is the position of Bishop Matthew Hassan Kukah of the Catholic Diocese of Sokoto. Unfortunately, some see it as a good fortune, a salvation because they are benefitting from it.

I have every confidence that The Nigerian autocratic Democracy will fall one day, if not today, then certainly tomorrow.

May God heal our Land through us.