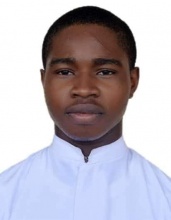 Rev Fr Christopher Omotosho, the Director of Communications of the Catholic Diocese of Sokoto has released information that the killers of Seminarian Michael NNADI have been apprehended by men of the Nigerian Police Force.

In an internal memo, he said “Dear brothers and sisters in Christ, this is to inform us that the kidnappers and killers of our seminarian Michael NNADI have been apprehended by the Nigerian Police Force. The seminary authority confirmed that the police came in with one of the criminals today, for identification of their entry and exit route to and from the seminary premises. May the soul of Michael Nnadi and the souls of all the faithful departed, through the mercy of God rest in peace. Amen!”

On Wednesday, Jan. 8, 2020, four seminarians, namely, Pius Kanwai, 19; Peter Umenukor, 23; Stephen Amos, 23; and Michael Nnadi, 18, were abducted in a 30-minute operation that saw the kidnappers, dressed in military uniform and armed with guns, force their way onto Good Shepherd Catholic Major Seminary Campus, which is home to 268 seminarians.

But while others were released, news filtered in on the first day of February 2020, that Seminarian Michael Nnadi had been murdered in captivity. His death had sparked outrage all over the country. At his funeral, the Catholic Bishop of Sokoto Diocese, Most Rev Matthew Kukah decried the rising spate of insecurity in the nation.

He however calmed the anger of many Christians saying “Christianity parts ways with other Religions when it comes to what to do with the enemy. Here, we must admit, Christianity stands alone. This is the challenge for us as Christians. Others believe in an eye for an eye, a tooth for a tooth, or that one can take either blood money or make some form of reparation one way or the other. However, for us Christians, Jesus stands right in the middle with a message that is the opposite of all that is sensible to us as human beings. Put back your sword (Mt. 26: 52). Turn the other cheek (Mt. 5:38). Pray for your enemy (Mt. 5: 44). Give the thief your cloak (Lk. 6:29).”

We continue to pray for our Police Force as they go about their duty of restoring peace and arresting offenders. God bless them for their good work.

May God forgive Michael’s murderers and give them the opportunity to turn new leafs, and may the soul of Michael Nnadi and the souls of the faithful departed rest in peace. Amen.