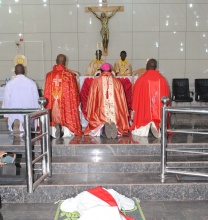 Our Lady of Perpetual Help Parish, Old Airport road was filled to capacity on the 29th Day of June being a memorable day in the Diocese as the Presbytery increased in number.

It was the Ordination of Rev. Habila Bala Sama'ila to the Catholic Priesthood.

In many African cultures, the  birth of a new child brings people together. It is graced with praises and thanks to God for the gift of life and for bringing another life into being. As the Lord will have it, on the 28th of August 1984, the family of Mr. & Mrs. Sama’ila Bala gave birth to a baby boy in Gidan korau village in Kafur Local Government Area of Katsina State. The whole village was transformed into a festival of joy, happiness and jubilation. Among the many good names proposed by relatives, his parents chose the name Habila (Abel).

According to Oprah Winfrey: ‘’if you want to accomplish the goal of your life, you have to begin with the spirit.’’ Rev Habila Bala was actually born with a great spirit of treasures, and to help bring out these treasures, he was sent to Maryam’s Nursery and Primary School Malunfashi, populary known as Fada School at Malumfashi Parish, Katsina state for his elementary studies from  1989-1998. From there he proceeded to St Joseph Minor Seminary Zaria, Kaduna State for his Secondary School Certificate from 1998-2004. Having completed these basic stages of education then came the moment of discernment. Rev Habila took the bull by the horn and enrolled himself as a teacher after secondary school. He taught in Himma’s Nursery and Primary School Jange (a school own by the church of Gidan Korau) from 2004-2006. He finally accepted to attempt answering God’s call to become a priest under the Catholic Diocese of Sokoto. Upon admission he was sent to Christ the King Propaedeutic Seminary Fadan Kagoma, Kaduna State for his spiritual year program. At the close of his one year program, Rev Habila was the sent to the prestigious St. Augustan Seminary in Jos, Plateau State for his Philosophical Studies and graduated with a Degree in Philosophy (B. Phil) in 2011 which was awarded him by the Pontifical Urban University, Rome.

As a prerequisite for those studying for the Priesthood of Christ, Rev Habila was sent to the Bishop’s court and the cathedral for his Pastoral year experience from 2011-2012. His zeal became glaring when he willingly opted to continue in the seminary formation. He was then sent to Good Shepherd Major Seminary Kaduna, for his theological studies. On the 16th of January 2016, Habila Sama’ila Bala was raised to the Order of Diaconate by his Lordship Most Rev. Dr. Matthew Hassan Kukah, Bishop of Sokoto Diocese at Holy Family Cathedral Sokoto. Rev. Habila Sama’ila completed his Seminary formation/studies on 11th June 2016 with a Bachelors Degree in Sacred Theology from the Pontifical Urban University, Rome.

Rev Habila enjoys reading, writing, praying playing badminton and traveling. Aside from these, he is very simple, jovial, understanding, hardworking, generous and caring.

His philosophy of life is the golden rule: “Do unto others what you want done unto you.”