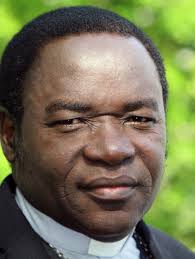 Bishop Matthew Hassan Kukah is the Bishop of the Catholic Diocese of Sokoto, Nigeria.

Bishop Kukah was born on August 31, 1952 in Anchuna, Ikulu Chiefdom in Zangon Kataf local government area of Kaduna State. Kukah received his primary education at St. Fidelis Primary School, Zagom, then St. Joseph Minor Seminary, Zaria, before proceeding to St. Augustine Major Seminary Jos, Plateau State, where he studied Philosophy and Theology. Kukah was ordained a Catholic Priest on December 19, 1976. Bishop M H Kukah also attended the University of Ibadan, where he obtained a diploma in Religious Studies. Kukah also received the Bachelor of Divinity at the Pontifical Urban University, Rome in 1976, followed by a Master’s degree in Peace Studies, at the University of Bradford, United Kingdom in 1980. Kukah's academic pursuits culminated with a PhD from University of London's School of Oriental and African Studies (SOAS) in 1990.

Between 1999 and 2001 he served as a member of the Nigerian Investigation Commission of Human Rights Violations. In addition to his work as a parish priest of Saint Andrews's parish in Kakuri, Kaduna from 2004 until his nomination as bishop, he was secretary of the National Political Reform Conference (2005) and from 2005 onwards he has been serving as the chairman of the Ogoni-Shell Reconciliation. Additionally, between 2007 and 2009 he worked also in the committee for electoral reform set up by the Nigerian government