An advocate for Christians in the Near East sees the same kind of patterns that threatened them now being repeated in Nigeria and elsewhere in Africa.

Stephen M. Rasche, co-founder and executive director of the Institute for Ancient and Threatened Christianity, said there has been a “dramatic rise in violence against Christians over the past three years in Nigeria.” Along with that rise, he has seen a “toxic blend of religious fanaticism metastasizing against a backdrop of a thoroughly corrupted, complicit or indifferent government [and] collapsing economic and educational opportunity.” The patterns, he said, are leading to a rise of religious violence against innocent persons “in which parallel motivations for unlawful material gain are played out simultaneously.”

Rasche, who is also vice chancellor of the Catholic University of Erbil in Northern Iraq, addressed a symposium in New York focusing on the persecution of Christians worldwide. The symposium, titled Act In Time, was convened by the Anglosphere Society. It brought together speakers both in person and virtually, to examine trends in various parts of the world, including the Near East, Africa and China.

Co-sponsored by the Knights of Columbus, the Center for Religious Freedom at the Hudson Institute, the Institute for Ancient and Threatened Christianity, and the Catholic Near East Welfare Association, the conference was dedicated to the memory of Andrew T. Walther, a former Knights of Columbus official who dedicated much of his career to the protection and support of persecuted Christians in the Near East and elsewhere. Walther died at age 45 of leukemia on November 1.

“Truly, the persecuted religious minority of Iraq had no greater friend,” commented Chaldean Archbishop Bashar Matti Warda of Erbil, in a speech delivered by video link. “That Andrew passed from us on All Saints Day was, in my mind, not by chance. We shall miss him beyond words.”

Nigeria on the brink

Rasche warned that while Christians in Nigeria are undergoing increasing pressures, “international analysts and policy makers continue to focus exclusively on the material motivations for the violence and all too often reach the safely contorted conclusion that what is taking place are mere land and economic disputes absent of any religiously motivated violence or intent.”

Those conclusions, he said, “do not bear up under the most basic evidentiary indicators on the ground: the testimony of the victims themselves.”

In support of that statement, he played video testimonies from several victims of violence in Nigeria, where his Institute for Ancient and Threatened Christianity is beginning to document the oppression.

The violence, he said, consists of attacks that are religiously based either in whole or in part. No governmental or international aid is reaching the displaced and the suffering, he added — only assistance from Church-based or small private NGOs.

“Likewise, no protection or justice is being provided or even offered to the afflicted Christians,” Rasche said. “Instead, a recurring theme is that the government is at best doing nothing and is at worst complicit.”

A bishop in the seat of the caliphate

Also offering testimony at the symposium were Bishop Matthew Kukah, head of the Diocese of Sokoto, Nigeria, and Steven S. Enada,  co-founder of International Committee on Nigeria.

Enada said that over 62,000 Nigerians have been killed in the last 10 years, over 500 churches have been destroyed, and over 3 million people have been displaced. In addition, he said, “over 35,000 girls are being sexually trafficked across the Mediterranean.”

Bishop Kukah referred to Sokoto as the “seat of the Caliphate, more or less a Vatican of the Muslims in Nigeria.”

While some observers attribute the violence to climate change or “simply a conflict between farmers and Fulani herdsmen,” the bishop said many are ignoring the central issue of the persecution of Christians .

“And priests are being killed. Church men and church women have been killed in their churches, churches have been destroyed across the length and breadth of this country,” he lamented.

In addition, in most of Nigeria’s predominantly Muslim states, governors are unwilling to sign certificates of occupancy and allocate lands for the building of churches. “If I’m looking for land to build a church, I have to buy the land and by other means … go round and round in circles before I’m able to put up a church,” the bishop complained.

Meanwhile, he said, 99% of the mosques in northern Nigeria are built by state governments and with state funds, the bishop noted.

Speakers offered several ideas about how to address the issues. Rasche, whose institute works to preserve ancient and threatened Christian peoples and cultures, expressed his hope that the foreign policy of the incoming U.S. presidential administration will begin by “honestly assessing what is taking place in Nigeria and not discounting the voices of the oppressed and persecuted Christians who are trying desperately to tell the world about the truth of what is happening there.“

Bishop Kukah spoke of the need for an economic response to the crisis and the importance of engaging the “faith community.“

“What we need to do is encourage the government to continue with some of the things that President Trump and a few other people have tried to do, which is to say the faith communities need to be engaged,“ the bishop said. “Because even in the politics of Africa, most African countries will tell you, if you interview ordinary people on the streets, they are more likely to listen to their bishops and church leaders than they are likely to listen to politicians. So from the point of view of trust, we have learned that there is a severe trust deficit in the political class. The religious leaders are very much trusted. 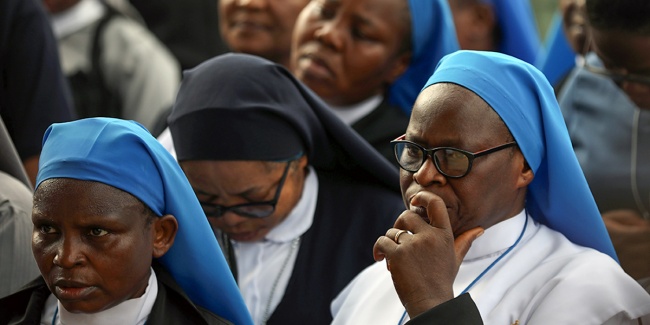