The Catholic Bishops in Africa on Sunday, July 29 officially launched the Golden Jubilee celebration of the establishment of their association known as the Symposium of Episcopal Conferences of Africa and Madagascar (SECAM) by unveiling the Jubilee Logo and reciting for the first time the Jubilee prayer.

SECAM President, Archbishop Gabriel Mbilingi of Lubango presided over the official launch of the yearlong celebration at the Sacred Heart Cathedral, Lubaga in Kampala, Uganda.

Some two dozen Bishops representing various Regional Bishops’ Conferences in Africa graced the solemn launch, during which the Jubilee prayer was recited for the first time.

At the beginning of Holy Eucharist, Archbishop Cyprian Kizito Lwanga of Kampala welcomed representatives of the Bishops of Africa to his Cathedral, explaining the significance of the place of the Jubilee launch including having been the seat of the King of the Buganda Kingdom, having hosted three Popes, the first having been Blessed Pope Paul VI in 1969 when he inaugurated SECAM.

On his part, the President of UEC, Archbishop John Baptist Odama of Gulu who spoke on behalf of the Bishops in Uganda, clergy, religious, and laity acknowledged with appreciation the presence of the various representatives of the various conferences and institutions of SECAM and said the place of Uganda in the history of the Church in Africa is a challenge to leadership in making the mission of SECAM spread.

SECAM Golden Jubilee logo was unveiled toward the end of the Eucharistic celebration, after being brought in front of the altar by two youth.

Bishop Emmanuel Badejo of Oyo diocese who Chairs the Committee of Bishops for Communications in Africa (CEPACS) explained the various symbols on the SECAM Golden Jubilee logo.

“The circle and the Africa map are merged together, to give the idea and the picture of Africa as a continental family; a family of pastoral collaboration, solidarity, showing Africa’s characteristics to the whole world. The circle reflects unity and oneness: May Africa remain one Africa,” Bishop Badejo revealed.

He continued, “The cross found in the middle of the African map is the same as the cross in the SECAM logo, but in this one, it reflects the victory of Christ over death and trials: May Christ be Lord over deaths and trials in Africa.”

“The open African map reflects that the Church in Africa is open to its Islands and to the rest of the world as it has always been and it shows the traditional warm welcoming of Africa, its hospitality, and true sense of community as we have witnessed today. May Africa remain welcoming and open to all the good things of this world,” Bishop Badejo went on to explain amid applauses from the congregation,

“The logo also depicts the theme of the Golden Jubilee: Church – Family of God in Africa! Celebrate your Jubilee, Proclaim Jesus Christ your Savior,” Bishop Badejo said, inviting the congregation to repeat after him the words of the Jubilee theme, adding, “The people in the logo, represent you and us, everybody; the people represent the larger family of Africa, in Africa, in Madagascar, in the Islands, in the diaspora, in the high seas, in the desert, wherever Africa may be and within the wider SECAM fraternity, which is celebrating the jubilee and proclaiming Christ.” 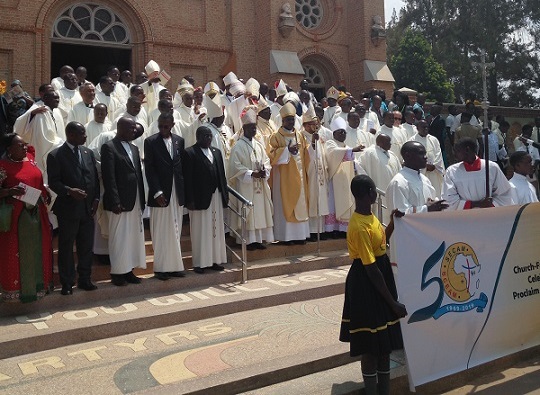 “The number 50 is designed in a free form to showcase and envisage a frame for a smooth-flowing celebration throughout the Golden Jubilee year,” he said.

“The colors used for the logo are the colors you find in the SECAM logo. The additional golden color brings out the celebratory nature of this celebration today and of the entire Jubilee Year, and it also represents the colors of the Holy See. Therefore, the Church in Africa is one with the universal Church; Africa and the universal Church remain one, with Christ we remain one. May our unity and peace be one day completely restored through Christ our Lord,” Bishop Badejo concluded, receiving a resounding Amen in song from the congregation of over 2000.

SECAM President then solemnly declared the Golden Jubilee officially and formerly open in the words, “For the glory of God, for the salvation of all His people in Africa and in the world, and for the growth of the Church, family of God in Africa, I hereby formerly declare the Golden Jubilee Year for the Symposium of Episcopal Conferences of Africa and Madagascar open, in the name of the Father, the Son, and the Holy Spirit.”

SECAM President then presented to the representatives of the various regional Bishops’ conferences “tools” that will be employed in celebrating the Golden Jubilee across Africa in parishes, devotional groups, homes, and institutions. Each pack contained hard copies of the Jubilee Logo, prayer, the working document, and a memory stick will soft copies of all the material, which can be distributed among clergy, religious and faithful in the various regions of the Church in Africa.

For the very first time, the Jubilee prayer was solemnly recited.

Prayer for the Golden Jubilee of SECAM

God our Father, we praise you for your infinite goodness for the Church in Africa and Madagascar, particularly for the gift of SECAM. We thank you for the first missionaries. In your eternal wisdom, you have blessed our Continent with much human, spiritual and natural resources; for this we thank you and we glorify you.

As we celebrate fifty years of SECAM, we acknowledge our sins and pray for repentance from our failings of bad governance, corruption, violence and misuse of all your gifts.

Give us greater love for our continent; help us to celebrate its rich and natural resources with sincere gratitude in our hearts and help us to use it for the good and well-being of all the people of Africa and beyond.

Almighty God, send us a fresh outpouring of your Holy Spirit in this year of jubilee, for a veritable conversion and reconciliation among ourselves, in order to bear greater witness to Jesus Christ our Savior.